In the year 2017 alone, 70,237 men, women, and children lost their lives to drug overdoses. Among those, 47,600 were from opioids and 15,482 were from heroine alone, and the numbers are rising, according to the USDUH. On a lesser scale, the National Survey on Drug Use and Health (USDUH) estimated that 19.7 million Americans from ages 12 and up had battled a drug use disorder. In other words, 19.7 million Americans have battled a drug addiction; and with the pain of that alone, their loved ones had to watch as their friends, kids, mothers, and fathers struggled to get away from one substance or another.

Even within our small community, drug use has had its effects on those around us. Not many will admit it, but even here at Skyline High School, there are students who go home and have to deal with a parent or sibling who abuses drugs. Along with that, there are many students who have done or still do drug-related activity, and for many, it’s not a good thing. With the compliance of some unnamed individuals, this article is being written to show the true horrors of drug abuse.

The first story comes from a bystander’s perspective, a story about what it is like to watch someone you love nearly take their own life. “It all started in the 7th or 8th grade. It was a usual thing for my parents to have some alcohol after a long day at work or over the weekend. They would sit at the TV, bottles in hand, and laugh as they watched their shows. I never thought much of it; life was going well. Then, tragedy struck. The corporation that my father had been working for for years was bought, and with it came many changes. As my dad struggled to get used to the new system, he watched as the corporation began to fire his coworkers, people who he cared dearly for and even considered friends, and put all of their work on him without any benefits for doing all the extra work. He began to become unstable, constantly worried about his job status and whether he would be able to support his family. As stress built and built, so did the receipts from the liquor store.

“The first major issue that came resulted in my father being hospitalized. In the hospital, my father was put into detox, a system meant to medically assist someone in recovery. He sat in that room for three days, sweating, shaking, and twitching. My mother, who has been with him the entire time and whom I love dearly, wouldn’t even let me see him to protect me from seeing the pain he was going through those three days. He returned home and continued his job, only to return to his old drinking habits. Over the course of the next three years, he would have many ups and downs, times when he would be perfectly sober and back to his old self and times when he would be blacked out on the cold floor of the basement. Within those three years, he would be hospitalized two more times, and even more than that he would be put into a rehab center to deal with detox either by force from his family or by force from the law.

“Another issue that came with the alcohol addiction was the obsession he began to have with taking his own life. It started slow, saying things while he was 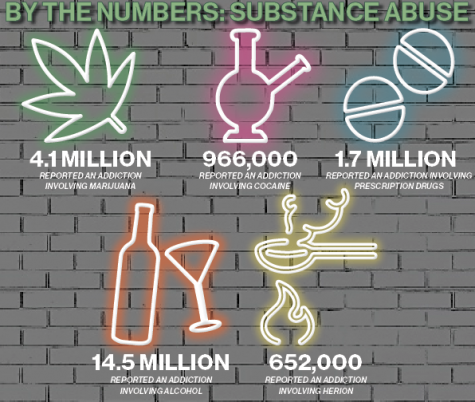 drunk like ‘I just want to go for a bit to get myself out of your hair,’ but we would never let him leave (because he was obviously drunk and did not want him driving whatsoeve

“Instead of taking the hint, however, he began to look for his stuff while we slept and attempted to sneak out. The most intense of those that I recall was very early in the morning about two years after the first hospitalization. I heard him tripping and bumping around upstairs in my sleep, and I had awoken from it. I had no intentions of confronting him at all for being loud, but it became an issue when I heard the jingle of his keys that we had hidden from him days prior in an attempt to stop him from taking his own life. I threw off my covers and ran to him, blocking the door. I remember the look he gave me when he saw me; bottle in one hand and keys in the other. Next thing I knew, I was wrestling

the keys from him. After a moment of shoving and pulling, I was able to knock his knees and drop him to the floor and recover the keys. To this day I remember the look in his eyes; that look that gazed into my soul and violently pierced my heart and I never had intentions to hurt him, but was there another option? I saved his life that night by stopping him, but it put a new mental wound that would last a lifetime into myself. No child should have to fight for someone’s life, let alone their own fathers.”

When someone is going through a traumatic event there are often many things that students do to cope with the stress. Some things that students do to cope are healthy, such as sitting and thinking about it, meditating, and talking about it to someone they trust. However there are many bad ways to deal with stress, such as resorting to drug use and other illegal activity. As for  Throughout any community there are always people and organizations that focus on helping those who need help through rough times, and everyone is encouraged to contact them at any time to receive life changing help. Some resources to use are the Drug Abuse Hotline, 1-800-662-4357, and the Police Hotline, 208-529-1200.

According to American Addiction Centers, 14.5 million Americans (5.3% of the population) dealt with an alcohol disorder in 2017. Unfortunately enough, that includes children from as young as 12 years old. Additionally, nearly half of the population has a family history of alcohol addiction or pr

oblem drinking, or using alcohol when stress builds or something is wrong in one’s life.

Drug abuse also flows in our schools and community. While it may not be obvious, there are kids that are forced to return home from school and deal with a parent or sibling who abuses one substance or another; and it is devastating to go through. If you know someone who is in danger or has to deal with such an issue, you can always talk to the local counselors, adult you trust.