Inspired Artowrk in the Hallways. 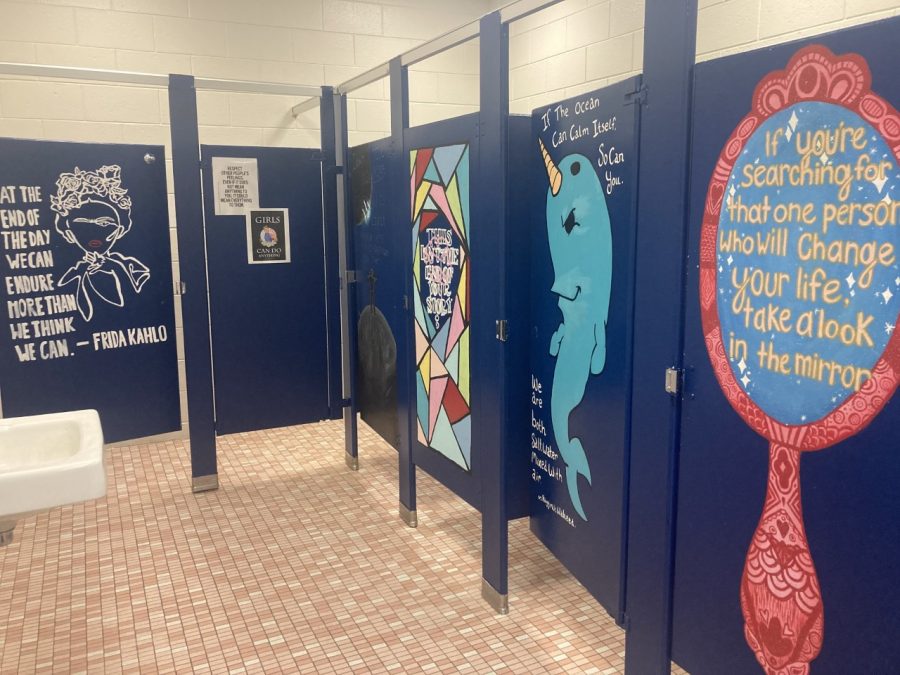 The artwork in the girls’ bathroom in the English hall: let’s talk about it. I’m sure most of you girls have noticed how there is new, uplifting artwork and quotes in the English hall bathroom. I’ve noticed that between a few of my peers, and I myself believe, this idea is a grand one. Instead of the plain, boring white walls with some graphic wording every now and then, it’s now filled with bright colorful artwork all over that inspires women to be their best and to not worry about what others think of them. These paintings have inspired a lot of people to not worry about what others might think of them. There is also a supply of feminine hygiene products in there to use if you don’t have any. This is super important for any female since accidents can occur when you don’t have any products to use.

Mrs. Batalden, an English teacher here at Skyline, had the idea to have the artwork in the bathroom created. Though she only did a couple of paintings, she did have help from a few students such as Rachell Newbeker, who states “I quite enjoy the positive reinforcement and hope all the student bathrooms have the same treatment.” Mrs. Batalden had this idea because she did not like the things that were previously engraved and written on the wall.

“And I thought maybe inspirational things would be a better thing to be there. When you’re going to the bathroom it’s much better to see something inspiring than something that’s mean and kind of a downer.” Batalden stated when asked about it.

Batalden personally paid for all the supplies to create the art in that bathroom, including all the powerful blue you see in there. At first, the office was reluctant to let her go through with the notion, but due to her zeal and empathy, not to mention her willingness to finance the endeavor, the administration agreed.

There has been a desire to redo the other girls’ bathrooms in the school, such as the one in the science hall. Batalden thinks that would be a great idea, saying “I wanted badly to do the one in the science hall because I went down and checked it. I had some students tell me how bad it was. It will take some science teachers that want to check it everyday, and they all feel a little too busy this year to take it on. I’ll probably do something in the summer, and then have it start with the painting, but I don’t know if I’ll be able to keep it up. And I know we want to put the hygiene stuff in there as well.”

A few male students in the school have come out and said that the boys’ bathrooms are gross and that they wish that the bathrooms were kind of like the girls’ bathroom with the paint and the quotes. Ultimately, the light atmosphere in general. It would make the bathrooms feel a little bit nicer and not monotonous.

So boys, if you really want to have a nice bathroom with cool paintings in there, ask your teachers about it and start a campaign about it. Start a revolution, just do it peacefully. And if you don’t care? Help the other boys that want those paintings in there.

Mrs. Batalden is also the one who came up with the idea of having the bathroom supplies in the bathroom for girls to use. “When you have a moment, you’ve got to get to the bathroom fast… the nurse isn’t always here, and that’s embarrassing to actually go into the office and ask. And I’ve had enough students that would say ‘Oh Batolden, can I go? I’ve got supplies but my friend is in the bathroom. Can I go?’ And I’m like, let’s just have them in there.” Batalden has also asked that if other people have extra supplies, leave them.

Rachel Nebeker has also given me the opportunity to interview her about how she feels about this idea. “I decided to help paint the bathroom to give it a fresh feel. The graffiti was driving me up the wall and it was another art project I got to work on and share.”

Rachel painted one of the stall doors. The stall has a girl standing on the moon with her arms stretched out, with the quote about the sky not being the limit as there are footprints on the moon. She did a wonderful job with this stall. “I quite enjoy the positive reinforcement and hope all the student bathrooms (including the boys’ restrooms, as a lot of the boys at our school need to know their worth as they don’t get it a lot elsewhere) can have the same treatment. Too many people deal with feelings of inadequacy and self-doubt. Seeing something like that can help remind them that there are people who do care.”

Rachel thinks that the hygiene products are great and very useful for the girls that need them. “The free hygiene products are amazing. Especially for those individuals who are too shy to ask for some. That, and it’s just useful to not have to trudge clear to the office and back just to deal with that.”

Art is a form of self-expression for the artist. For the people looking at the art, you can get the idea of where the artist is coming from. These people can see the emotion and the meanings behind it. So, having artwork, like the art in the bathroom, is so important. It makes girls feel like they belong. That they aren’t weird for the way they are. To trust and inspire other women. It creates so much realization that everything is fine. People are perfect the way they are, not only girls, this works for anyone. The boys, the nonbinary, whatever you identify as it works to make you feel better about yourself. If we all pitch in, then this could stay a thing here at Skyline.