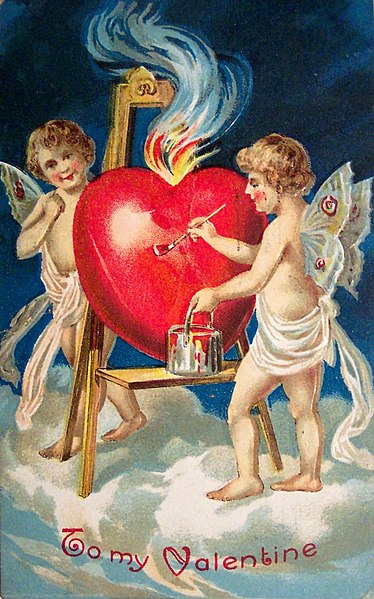 Valentine’s Day has become a huge part of our society. Every year the amount spent on Valentine’s Day in the United States alone amounts to around $21.8 billion; whether that’s spent on dinner dates, flowers, chocolates, or whatever. Some people even go out of their way to outdo themselves from previous years, celebrating each year in a more and more extravagant way. However, Valentine’s Day couldn’t have always been celebrated the way it is now. After all, the chalky candy hearts decorated with cheesy ‘be mine’s and ‘XOXO’s weren’t even invented till the early 1900s. So that leaves three questions in mind: how did Valentine’s Day come to be, how was it celebrated originally, and how has it become the holiday we know today?

Holidays are very complicated, with long histories, evolving from multiple cultures and traditions to get to the holiday we know today. Although the origins are vague, Valentine’s Day can be traced all the way back to an old Roman festival called the Feast of Lupercalia that was celebrated in the spring, February 13th through 15th. When people today think of festivals they probably imagine a grassy expanse with colorful triangular flags hanging from strings, strung along between wooden posts that stand tall, stuck into the ground. Maybe they imagine the waft of sweet fruit and freshly grilled hotdogs and chicken, a scent that can be traced back to a couple of small stands run by local farmers and restaurants. Maybe people are dancing or playing guitar and singing on a small stage; a humble crowd of families, parents with smiling children, gathered around. The image gives off a warm, joyful feeling. However, the celebration of Lupercalia was nothing like the fairytale one imagines a festival to be. The festival of Lupercalia was not a celebration of love or romance, it was more a ritual of fertility. The men were drunk and they would sacrifice goats and dogs, then whip young women with the hides. This was said to make them more fertile. During the festival, the women were also paired off to men using a lottery. However, this all came to an end in the 5th century when Pope Gelasius I forbade the festival to be celebrated ever again. Valentine’s Day now replaces it, celebrated on Saint Valentine’s feast day: February 14th.

Saint Valentine of Rome is a saint recognized by the Catholic Church but there’s little known about him and his identity is hazy. In fact, there’s so little knowledge about him that some people argue two different saints by the name of Valentine are the same person. However, one thing that’s agreed is that he was martyred and buried on the Via Flaminia in Rome.

One popular belief as to why Saint Valentine is associated with the holiday is justified with the following story. Valentine was a priest in 3rd century Rome, which, at the time, was ruled by Emperor Claudius II. At one point during his rule, Emperor Claudius II decided that men who were single made better soldiers than married men, thus he ruled that young men weren’t permitted to marry. Valentine ignored the decree and continued to marry young couples in secret so the husbands wouldn’t have to go off to war. When Emperor Claudius II learned of Valentine’s doings, he had him imprisoned. The story then goes on to tell of a friendship that started growing between the emperor and Valentine. However, the friendship ended with an abrupt halt when Valentine tried convincing Emperor Claudius II to convert to Christianity. The emperor got upset, telling Valentine he could either renounce his faith or be beaten and beheaded. Valentine chose the latter. That’s why Saint Valentine’s feast day, February 14th, is celebrated worldwide as a holiday of romantic love.

It makes sense that that’s a widely believed origin story for Saint Valentine’s Day. After all, it’s about couples being saved from being ripped out of each other’s arms and people willing to risk imprisonment for the one they believe their life will lose meaning without. It’s a story about being able to live together with the love of one’s life for the rest of eternity in peaceful, passionate bliss. It’s about one man loving others so much that he risks his own life for them, people he didn’t even know, so they can live a long happy life and be able to share and grow their own love. Who wouldn’t want to believe that that’s the origin of Valentine’s Day? It’s a story more romantic and beautiful than Pride and Prejudice.

However, one change to an ancient festival wasn’t enough to change a whole holiday tradition immediately. As the years went on, writers such as Shakespeare started to romanticize the day. As the people in Britain became further infatuated with Shakespear’s writings and ideas, they started to accept February 14th as a day of romance and affection between lovers. The holiday stuck and new traditions began. By the middle ages, one of the main ways the people celebrated was by hand-making cards for their lovers. The traditions of Valentine’s Day eventually made their way to America, where the card industry grew. Although printed Valentine’s Day cards had already come into existence in the 1800’s, It wasn’t till the early 1900’s that the Hallmark card industry rose to power. The Valentine’s Day manufacturing business has only grown since.

Valentine’s Day changed a lot to get to where it is today. Dating all the way back to before the 5th century, somehow the holiday changed from a festival where men would whip women with animal hides, to a day when lovers exchange chocolates and plushies. Yes, the history of the holiday is vague, and we might never know exactly how Valentine’s Day came to be, but the future seems pretty clear: the current Valentine’s Day traditions probably won’t be changing anytime soon.