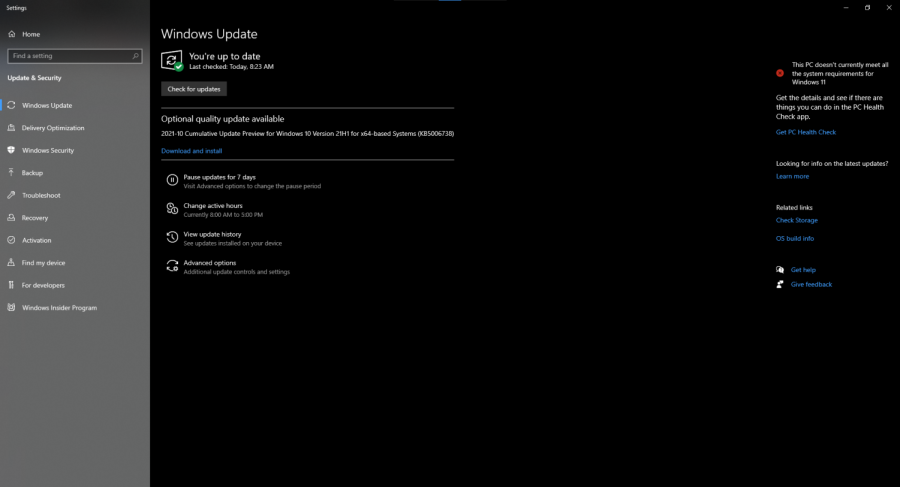 A lot of people are asking the question “What is the point of Windows 11?” I personally have the same question and curiosity. Those who currently have or had the opportunity to navigate the OS, including myself from mid-September to now support that question. Especially for mainstream users.  With Windows 10, Microsoft had to make corrections from Windows 8, which you may remember focused on touch screens and tablet PCs. Before that, you may recall Windows 7, which was an apology for Windows Vista, an OS that was ahead of its time. Windows Vista was slow, crashed frequently, and was a terrible follow-up to Windows XP, to say the least.

You could say that there is a context behind these operating systems over the last decade. Windows 11 feels different. It was abruptly announced. Nobody was really anticipating it. After using it over the last three weeks, it just seems like nothing has changed. That could possibly be the point. It’s just a new design on an existing OS. It’s also possible that Microsoft is trying to save phase from Windows 10x. Which was focused on dual-screen computers that could be installed on the Surface Neo and other PCs. That later was delayed. Overall, just spending some time with Windows 11, it simply seems as if it’s Microsoft’s attempt of creating a mindful OS for their consumers.

I wonder if it’s just Microsoft attempting to focus more on visual aspects. At first glance, it looks like a radical departure. The taskbar is centered. I’ve never seen that on Windows. It looks more like macOS rather than a traditional Windows operating system. The Start menu has once again been redesigned. This is again, something Microsoft doesn’t want to review after Windows 8’s Start menu disaster. Which was full screen, not very many users liked it. But I personally favor Windows 11’s Start menu rather than tiles over my desktop. This modern look can be seen throughout Windows 11. From opened windows to Settings. Everything is organized more efficiently.

Windows 10 was one of the most productive operating systems. Microsoft did a lot after Windows 8. Windows 11 feels like a design-focused upgrade. I didn’t know this until returning to Windows 10 on my laptop, but you could move the taskbar back to the left if you don’t like it centered. Eventually, I got used to it. However, there are a few organizational issues that were difficult. The window labels aren’t visible anymore. For me personally, that’s somewhat of a problem. Among other changes, the System Tray has been updated. It looks somewhat more organized. Additionally, you’ll see the calendar. The System Shortcuts have also been updated. You can open it by selecting the Volume or Wi-Fi icon on the bottom right. This lets you configure simple settings to your PC. You can adjust the volume and change the display brightness. Yes, some settings are confusing. When testing this out, the Night Light wasn’t present. Then it just appeared in the Action Center.

Windows 11 also brings back Widgets from Windows 7. But I don’t think anyone will care or pay any mind. They’ll appear when you select the Widgets icon on the Taskbar. You’ll get news, weather, and search functionality that was already in previous versions of Windows since 95. I tried it out, but I don’t see any point in them. That’s not how I’ve used my computer. They could be integrated into the Start menu. But it is more useful, you could say. But that would repeat Windows 8’s tiled Start menu. There are changes to applications as well, such as the Microsoft Store. It looks a lot more organized and cleaner. It has tabs on the left side. It allows you to find applications easily. When selecting the app listing, it’s separated into frames. This UI is eventually coming to Windows 10. Which feels like less of an upgrade. One feature that is exclusively going to be on Windows 11 is Direct Storage. Direct Storage is just what Microsoft integrated on X-BOX. Consoles. It’s meant to speed up load times on new NVME Solid State Drives. Windows 10 isn’t getting this feature. This is likely a carrot to encourage people to upgrade. Those who want the best PC times possible will likely upgrade. As well as gamers. For everyone else, there are a few reasons that might persuade them to upgrade. Unless you just want the newest esthetic. It’s very likely that people will upgrade because of the new X-BOX application.

For the most part, however, things are just going to trickle down to Windows 10. Running Windows 11 on my XPS laptop for about a month, I didn’t have any difficulty with the set-up process. You can still choose whether or not you would like to provide your information to advertisers and what not. Within five to 10 minutes, you’re finished setting up and you’re directed to your new desktop. However, I believe that there will eventually be controversy once people come to realize the differences between Windows 11 Home and Professional. When Microsoft abruptly announced Windows 11, they casually said that an internet connection and a Microsoft account are required to set up Windows 11 Home. This is a major restriction. Previous versions of Windows didn’t require that. Windows 11 Pro however doesn’t require this. This means that Windows 11 users cannot create a local account to start using their PC. Windows 11 Pro is more suited for IT users and others who may be setting up different systems. Personally, I find that annoying for those who do not have an internet connection. After setting up your PC however, you can use local accounts. But it’s something that prevents the “accessible” objective Microsoft is pushing.

I’m anticipating that a lot of users will just upgrade their PCs rather than purchase a new one. It’s simple. However, that’s yet another limitation that restricts users from upgrading. Microsoft has some very restrictive requirements. 8th Gen. Intel CUPs which are roughly five years old are needed. You will also need a TMP 2.0 Module, as well as SourceBoot enabled. These are required to possibly try to combat malware and stay secure. You can bypass the requirements by just installing the ISO file, opening the Command Prompt, running the Registry Editor, and modifying some keys. When updating my Dell XPS, I didn’t have any trouble with navigation. To do so, however, I had to enable SecureBoot. Additionally, I had a lot of command work to do. This is something that I believe people will want to put up with. Especially mainstream users. It seems as if Microsoft is still trying to figure out its plans for Windows 11.

Overall, Windows 11 is a decent operating system. It’s organized, clean, and easier to navigate. The UI looks nice. It’s fulfilling Microsoft’s objective to look cleaner and nicer. Since the days of Windows XP. The complications with Windows 11 are learning how to navigate it. It’s just so different. For the time being, you can’t enable window labels. Yes, you can use ALT + TAB or Win + TAB to navigate between your programs. It’s just something that I’m not used to. Windows 11 looks a lot like macOS. But who needs Windows 11? I believe like Thanos, Windows 11 is inevitable. It’s something you’ll eventually update to. Microsoft will discontinue updates sometime in the future. Just like they did for Windows 7. But I don’t believe that it’s justifiable to upgrade due to the design and navigation. Lots of people will upgrade for the purpose of the X-BOX application. I’ll likely reinstall Windows 11 once more apps are compatible with it. Granted, it’s still a beta. Microsoft is trying to provide its users with a more relaxing experience. Except the update requirements are so difficult. But overall, upgrading from an existing PC to Windows 11 is simply difficult.

If you may remember, this was going to be Windows 10x. Then later Microsoft announced that Windows 10x would focus on single-screen devices. But due to hardware not distributing on time and COVID-19, Windows 10x was canceled. Shortly after, Windows 11 was announced. Which makes me wonder. Does Microsoft want people to purchase new PCs? It’s a very convenient time to do so. Considering a lot of people are working from home. Regardless, a new Windows operating system is going to get a lot of attention rather than a mere Windows 10 update. If you’re curious about the developments, have a look at my social media. Screenshots and other IT news can be found.