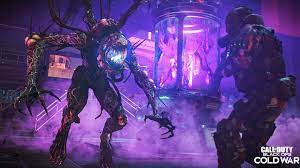 Call of Duty Cold War released a new map February 4th called, “Firebase Z”, the map takes place in a fictional zombie infested Vietnam. Firebase Z’s setting is a crash site and a battlefield making the playable map a super big one. There are new in-game ‘perks’ added to the map and one of them was “Tombstone”. ‘Tombstone’ is a perk that gives you another life in game, or essentially a second chance for you to keep on fighting in the game. There will be old in-game bosses and new bosses as well added in the game. The first one is a “mimic:” and those things have deformed feet and hands, also have two extra hands on their back, they look weird and scary. The mimic has two hands on it’s back, the inside of his mouth is an odd, large, blue void that he uses as an attack, he can grab you and then bites you, and will follow it up by throwing you to the ground. The second boss you face is a “Mangler”, he has protective armor all over his body, he has a hand that is a ‘launcher’ in the sense that it shoots a large ball of fire at you. Those are the two mini bosses you have to face that lead up to the final boss that you have to defeat, its name is “Orda”, it is super hard to defeat unless you have the right weapons. Speaking of which, a new “wonder weapon” was added to the game, it is an assault rifle that shoots little balls of purple liquid and also has a useful setting you want to get rid of a whole pack of zombies, you can shoot a giant ball and if you shoot it you can make it explode. There is a large battlefield and in the field, some portals can appear and the zombies will go through the portal to follow and attack you. There is also a reactor that you must defend, you have to destroy the incoming enemies before they destroy the reactor. When doing this there are certain challenges or ‘trials’ and by completing trials, you will receive rewards depending on the challenge, the harder the challenge the better the reward will be.