The Science of Swearing 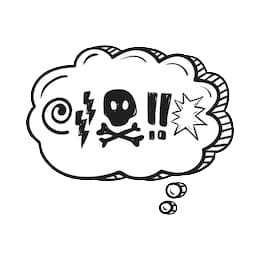 If Skyline High School received an age rating from the MPAA, it wouldn’t be PG-13—any more than one f-word in a film pushes its rating to R. Take one listen on a trip down the hallways during passing times, and students can surpass that limit with endless ease. In its time at Skyline, the “f-bomb” has been creatively hackneyed—I’ve heard it used and misused in colorful contexts—in ways I never even knew I could think about. It’s no secret the transition from elementary education to secondary education brings with it a psychological whirlwind of changes, one of which is the introduction of a brand-new, vulgar vocabulary. The real question is—for what reason, and what are the consequences?

Research has been conducted which suggests dropping the occasional swear could help ease physical and emotional pain. Finger pinched in a door? An “Ow, s**t!” should do the trick. Bit by a dog? “Son of a b**ch!” Perhaps, then high school is just that “painful,” and students feel the need to utilize swearing as a coping mechanism. In just one day at Skyline, I took note of every swear I heard—seventy-six over four hours. In my own experience, I have also noticed certain groups tend to have an affinity for swearing over others. There is certainly an element of peer influence involved. If everyone around you is swearing, and you don’t have a problem joining in, you are probably much more likely to do so.

It’s also important to note the number of psychological changes which face students in the years following elementary school. Though students are still monitored by teachers and administrators, the additional level of freedom found in middle and high school can lead many students to gain the confidence to try out new words which were otherwise prohibited at school and in the home. Teachers generally ask students to adopt more “professional” vocabularies from bell to bell, but it becomes much harder to monitor in between class periods. I hear swears most frequently en route to my next class.

Sarah Youinou (12) says she chose to start swearing in middle school because it gave her a way to break out of the image she had been shoe-horned into. Youinou believes there is definitely a stigma surrounding swearing, one that is augmented in our school and community. “It’s not so bad at Skyline, but there is an idea that you are less ‘smart’ [if you swear]—you lack a vocabulary. People think that when you swear it’s because you have no other words to say. On the contrary—I have a lot of words to say.  I would just like to say ‘s**t’ as well.” She doesn’t have a problem with swearing, but she does see a limit. “It comes to a point where people don’t really use any of their vocabulary besides curses, which is unprofessional. If you walk into a job interview with poor language, you probably won’t get the job.” One thing is certain—swearing can add color to your vocabulary, but it might be a good idea to moderate it around supervisors and potential job opportunities.