Drama in The Annex 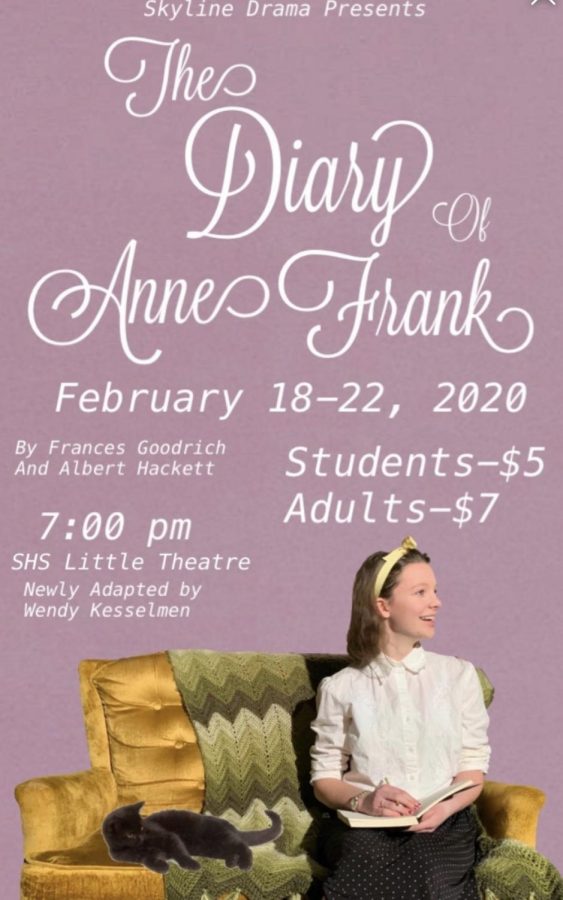 The heart-wrenching true story of Anne Frank and her family is known everywhere in the world. Now our own Skyline Play production is perfecting their last steps to perform this drama February 18-22. The young actors in this play have only had a month to memorize their lines, expressions, and blocking.

There is a lot of stress involved in putting together a play. Kayla Speas (12), the stage manager, and Beci Beck, the adviser, are the people who take on this stress. “Its real wild. I built the set and it was a really cool experience because I’ve never built a set before. It’s my senior project and I will be designing the whole interior of the set. It’s exciting because even though I’m not in the play, I can still be a part of it. It’s pretty rad!” Speas said.

The pressure of perfecting a character is always there, but this play definitely piles the pressure drastically more. The need to do justice to their characters, who are actual figures from history, is a scary thing. Angel Green (11) has expressed trouble connecting with her character, Anne’s sister Meip. “I just don’t like it because I can’t relate to anything she’s going through,” Green said. This could be the most understandable reason to not connect to a character; however, her peers say she has been doing well.

Aiden Kelly ( ) has expressed his love for the play and being able to play someone with so much depth. “I love the play because it’s a piece of history and I learn so much by being in this play, and I love my character, Peter.” Kelly is one of the stars in this play, and has a huge role in the way that Anne matures towards the end.

The star we can’t wait for is Korynn Moore (10). She is playing the one and only Anne Frank. “It’s very exciting, especially because I’m super shy. It’s fun to be able to go up and feel like I can be myself,” Moore said. She is almost done with memorizing her lines, as she is great at getting her lines down. “There is a lot of pressure getting the character development throughout the play because there’s a huge change in maturity and acting like you are fearing for your life everyday,” Moore said. As she contemplated what the experience must have been like in real life, she has been amazed. “The set shows how small and crowded it was,” she explained.

Sometimes being on a stage with people around there with you isn’t as scary as presenting a speech or just giving quotes in an interview. Play Production teacher Beci Beck has helped many people be themselves up there on that stage. “Beci Beck has helped me break the shell of what I was once in freshman year. Before I was in play production or acting with beck, I was bullied, depressed and honestly didn’t feel like I belonged anywhere,” Kaylin Kuhn (12) said. “Beck showed me a way to get out of this world and be a different person. Because of Beck and play production, I started to feel like I had a safe place and a family at school. Somewhere I could go and forget everything else. Play production is the best thing to happen to me and probably a lot of others in it,” Kuhn added.